We reviewed the Windows 10 application Bloatbox earlier this month and found it to be an excellent app for Windows 10 administrators who like to remove some or even most of the included applications the operating system ships with.

The program is open source and created by the developer of the retired Debotnet application and its successor Spydish. It displays the list of supported non-system apps in a sidebar by default. You may display system apps as well that it supports, and move all apps that you want removed to the processing list.

While we liked the program in general, we noted that it lacked restoration options and that some of the interface elements could be confusing. 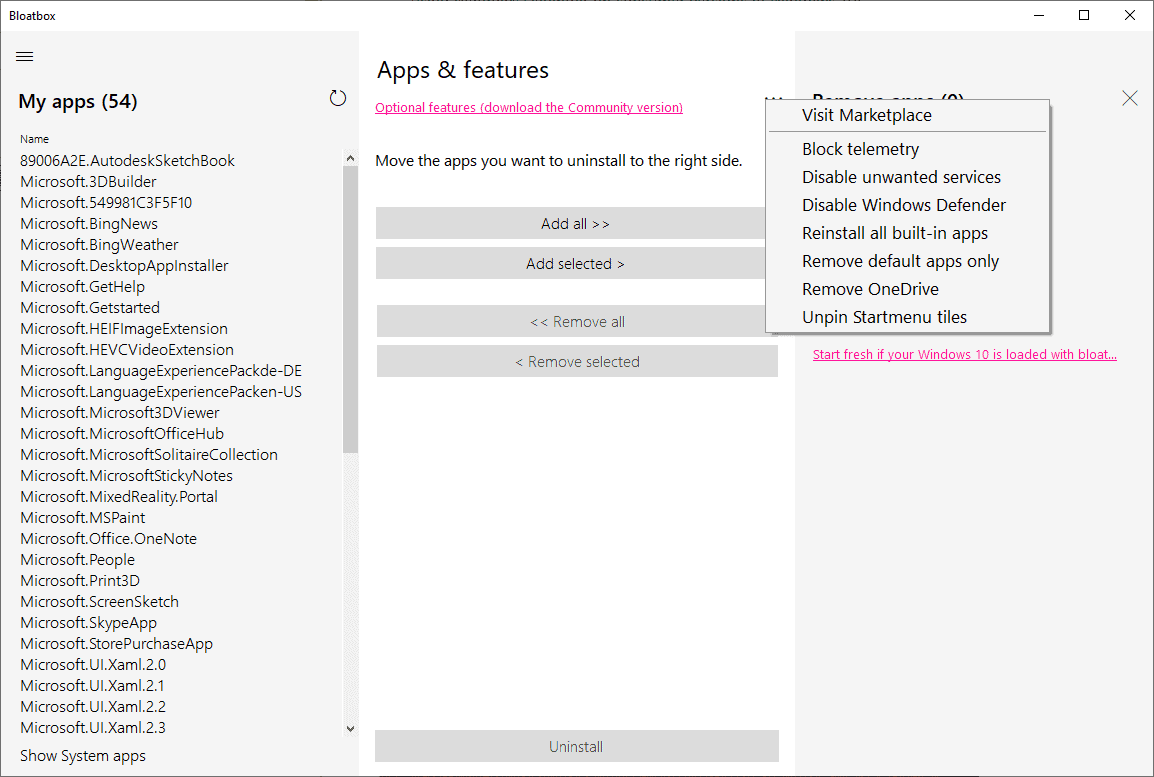 The new Bloatbox 0.14.0 takes care of the first issue. The program supports scripts now that you can integrate in the application. While that is mostly of interest for advanced users, all users may download a package of scripts and integrate it into the application with just a few clicks.

Here is what you need to do:

Click on the three dots at the top of the middle column to get a list of available actions. These are, at the time of writing:

The fourth option brings all built-in apps that you may have removed earlier back by installing them again on the system.

The menu items are descriptive but they lack further information, e.g. which services are unwanted and will be disabled by the script when you run it? Bloatbox displays additional information when you select an item and displays a confirmation prompt.

All scripts are PowerShell scripts, and the best option when it comes to finding out what they do is to open the script in a plain text editor. You find them all in the scripts folder, and all include comments at the top that detail what the script does. An option to check out the script from within the application would be useful as it would speed up the process.

The new version of Bloatbox improves the program by adding an option to it to restore previously removed applications. Users may find some of the other options useful as well, but programs like the developer’s own Spydish are probably better suited for that.

Call of Duty Black Ops: Cold War – Everything you need to know about the shooter blockbuster