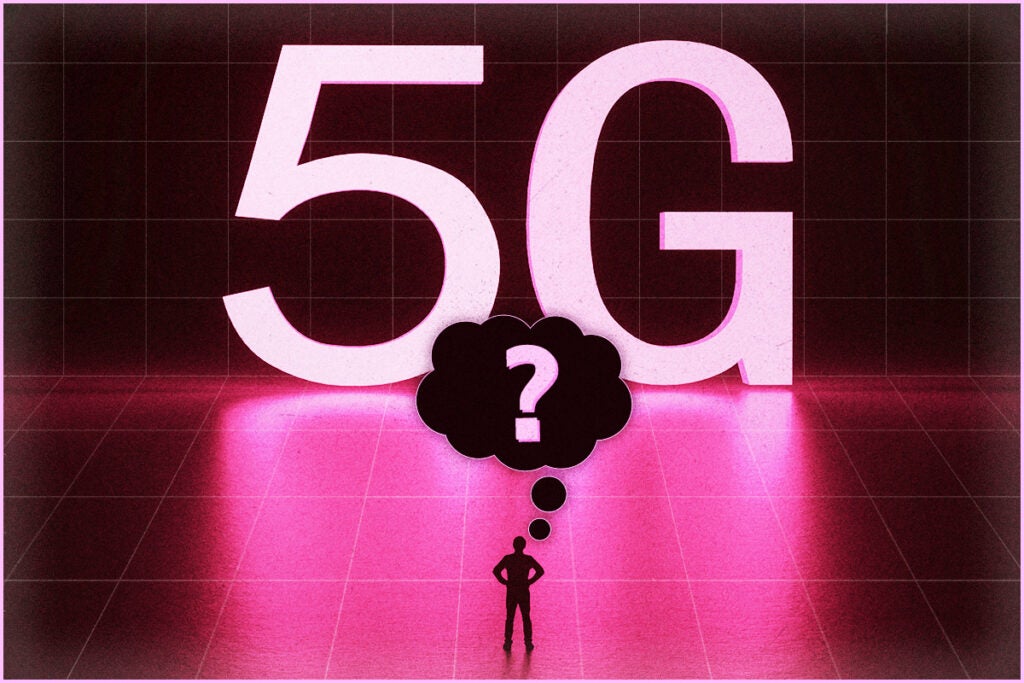 If you’re looking at upgrading to a new phone, or change contracts chances are you’ve seen the term 5G thrown about.

The new networking tech is currently a vogue item, with numerous telecoms companies and phone makers viewing it as the biggest thing to hit the market in close to a decade.

Which is why stores and tech companies alike are making a huge song and dance about it in all their marketing materials. But, despite all the hooha most haven’t done a very good job explaining what the tech is and the tangible benefits it brings to the end user.

This is not helped by the fact there are actually different types of 5G – you may have noticed some 5G specs sheets refer to mmWave, while others list the connectivity as sub-6GHz – which causes all manner of confusion.

Here to help you cut through the technical mist we’ve created this guide detailing everything you need to know about 5G.

At its heart 5G is a next generation networking technology that is rapidly being rolled out across the world. It’s designed to sit alongside the existing 4G infrastructure, not fully replace it.

There are different types of 5G and the version you get will depend on the region and your network service provider.

At a basic level the tech promises to offer users significantly faster data speeds than 4G. Specifically, most networks list it as offering “gigabit-per-second” (Gbps) speeds.

For non-techies a gigabit is a measurement of data. Gbps refers to how many of these measurements a network can move per second. Network speeds are defined by how many Gbps can be uploaded and downloaded, which is why you’ll see estimated up/down speeds on your phone and broadband contracts.

This makes 5G incrementally faster than 4G, which averaged between 200-300Mbps speeds. There are 1000Mb in a Gb as a frame of reference.

5G will open the door to do things that simply weren’t possible on 4G, as a result. These include things like game streaming on services such as Amazon Luna, Google Stadia, Nvidia GeForce Now and 4K/HDR video streaming on mobile devices without an active WiFi connection.

How does 5G work? Sub-6GHz vs mmWave

Describing how 5G works at a technical level is fairly tricky, but a base level it works by sending data over a different spectrum to 4G. Spectrum is a specific band of frequency used by telecoms providers to send data from mast towers/sub stations to your mobile device. It’s kind of like the highway network used to carry information.

At the moment 5G is split into two categories. Sub-6GHz is what most people are on at the moment. It’s the lesser form of 5G that, as described, runs on frequencies below 6GHz. This is because the signal/connection is easier to manage and can travel further.

Frequencies above 6GHz, known as mmWave, offer in theory faster data connection speeds, but the trade off is that the signal doesn’t travel as far and needs a much more direct path to the mobile device’s antenna. Even minor obstacles, like the user’s hand or a thin wall will stop the connection working.

Telecoms companies need to use work around solutions to make it work, which is why it’s not as common a sight as sub-6GHz at the moment.

Exactly how fast is 5G?

With all this in mind, the speeds you’ll actually get on 5G differ dramatically depending on which network you use and what chipset your phone has.

It is possible to pick up a 5G phone that won’t break the bank. The Moto G 5G Plus is one of the best we’ve reviewed and retails for around £300 in the UK. The only downside is that the 7-series Qualcomm Snapdragon chips used aren’t compatible with mmWave, so down the line they won’t offer as fast data connections. There is one notable exception, and that’s with the US version of the Pixel 5.

However, even in the top end of the market the number of phones with chipsets supporting mmWave is limited. These include the uber-expensive Galaxy Note 20 Ultra and US version of the Pixel 5. Even Apple’s hotly anticipated iPhone 12, which is rumoured to be the first iOS handset to support 5G, isn’t expected to work with mmWave. You’ll have to get the high-end Pro model for that.

This means most 5G users in the UK will get sub-6GHz speeds of around 1Gbps by default. The fact the UK doesn’t have mmWave by default makes gauging the exact speed difficult. But, Samsung claims it’s managed to achieve 7.5Gbps, while Nokia claims a more impressive 10Gbps in lab conditions. So it should be another nice step up on sub-6Ghz, if you get a decent connection.

The post What is 5G? How the new networking tech works appeared first on Trusted Reviews.

Sonos Arc vs Sonos Beam: Which is right for you?

Nest Audio vs Google Home: Is it worth upgrading?