Microsoft made the Windows 10 May 2020 Update generally available on May 27. Though the feature update had been in testing for about 15 months before being released to the public, it had a bunch of known issues at launch, most of which were not listed earlier. While the Redmond giant blocked the update for some devices, other issues had to be patched separately.

Now, some users on the Tech Community forums have begun reporting issues with OneDrive Files On-Demand after updating to the May 2020 Update. The issue results in the service serving an error that states that “OneDrive cannot connect to Windows”. The prompt provides users with an option to download files that have not been synced but notes that ‘online-only’ files cannot be downloaded. However, the download itself gets stuck. Moreover, users are unable to even open files that are synced with OneDrive. 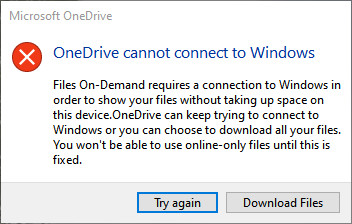 Microsoft responded to the user that filed a support ticket, acknowledging that “there is an ongoing issue with that 2004 update and many users are affected with it”. The response does not specifically acknowledge the OneDrive issue, and the problem is also not listed in the known issues section of the update’s status page. The response also adds that the company is working on a fix which should arrive soon.

According to the comments on the forum page, it looks like a couple of workarounds have been successful for some users, including resetting OneDrive or tweaking the ‘Cldflt’ instance in the registry. However, these – including an official one on Microsoft’s support pages -, do not fix the problem for all users. Updating to the Insider release of the OneDrive sync client also does not solve the inability to make use of Files On-Demand.

Currently, it’s not clear how widespread this entire thing is. However, given that the company has personally acknowledged “issues” with the 2004 (May 2020 Update) via Support, it will be interesting to see if this bug gets added to the list of known issues, and if a cumulative update will be needed to fix it.

Source: The Windows 10 May 2020 Update is breaking OneDrive Files On-Demand for some users (via Neowin)