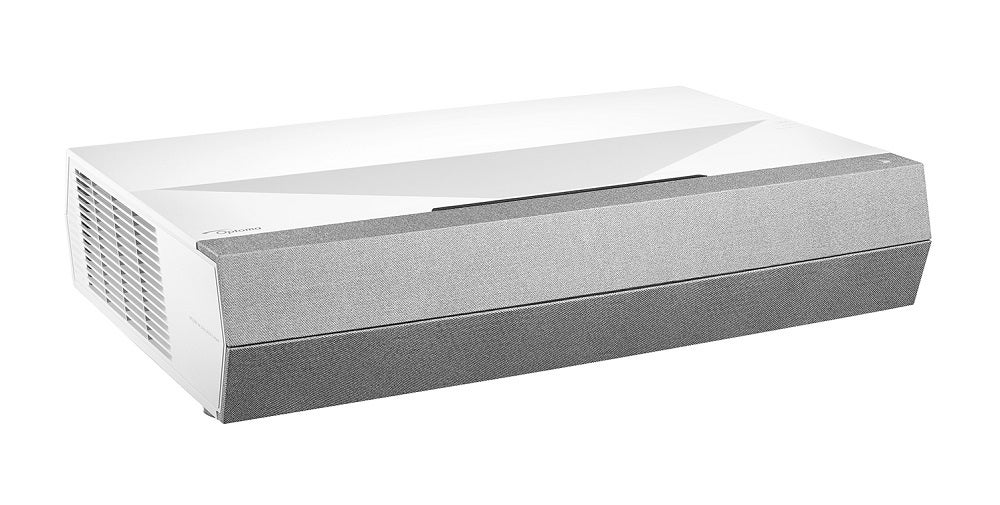 Optoma has expanded its CinemaX range of projectors with its P2 ultra short throw laser effort.

The CinemaX P2 follows on from the CinemaX UHZ65UST and P1, with Optoma claiming its latest projector is able to deliver high contrast and vibrant colour performance.

Designed to be placed right next to a wall, the CinemaX P2 can decode a Dolby 5.1 soundtrack into its 40W 2.0 soundbar, with its ultra short throw glass lens able to cast a 120-inch image on the wall. If you have 3D discs, they’re also supported too.

Inputs include 3x HDMI 2.0, Ethernet and USB, while outputs tally at a 3.5mm, USB and optical. The laser lamp can last for a very lengthy 20,000 hours.

It packs in support for wide colour gamut (WCG) to portray colours in the way creators intended, and there’s a 4K HDR10 compatible media player for hooking up an external USB stick plus gaming mode included.

CinemaX P2 also has a bevy of smart features, making it something of a lifestyle projector too. The built-in SmartFit app offers “hassle-free” set-up/image alignment through a user’s smartphone, and there’s integration with Alexa and Google Assistant for simple voice commands to turn the projector on and off, pause content, control the volume and more.

IFTTT support takes its feature set further with smart home automation with smart IoT devices, as well as access to apps through the Optoma Marketplace such as YouTube and Spotify.

For best brightness and maximum contrast, Optoma suggests the CinemaX P2 be used with Optoma’s own 100-inch ambient light rejecting ALR101 screen (although that would be mean losing 20-inches from the max image size). The ALR101’s screen surface has been designed to reflect a projected image for high contrast while also preventing ambient light from washing the picture out.

Kishan Mistry, Product Manager at Optoma explains: “It’s all about the experience, that’s why we’re excited to expand the award winning CinemaX range so consumers can bring the cinematic experience home and enjoy superior picture quality from the number one brand worldwide in 4K UHD projection technology.”

“Offering an innovative ultra short throw lens, the CinemaX P2 is easy to place and play, enabling families and households to view an immersive large-screen experience from only inches away from the screen. Combined with cinema-quality sound, and smart-home integrations at an attractive price point, the CinemaX P2 is the ultimate home entertainment solution.”

The CinemaX P2 is available to buy from retailers such as Richer Sounds and SevenOaks for £2999.

Google shows off Android 11 emoji, including the return of a classic