Microsoft plans to remove the Fetch Files feature from its OneDrive desktop client at the end of July 2020. The feature allows OneDrive users to transfer files directly from another computer linked to the account from the OneDrive website.

The feature supports network locations and regular locations for the fetching of files, but requires that the PC hosting the data is online at the time of the request. Additionally, the PC needs to be connected to the Internet, OneDrive needs to be running on the device, and the Fetch Files feature needs to have been activated previously.

To activate the feature, users have to open the OneDrive Settings and check the “Let me use OneDrive to fetch any of my files on this PC” option. 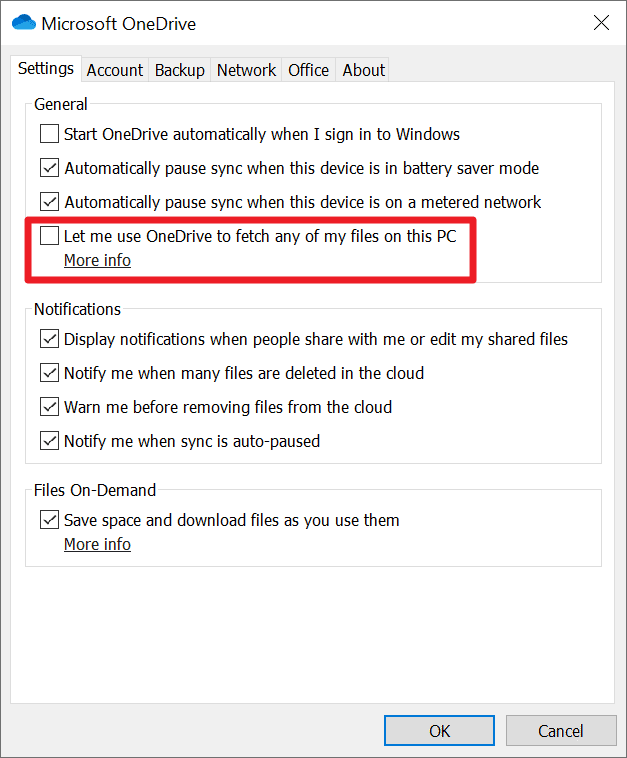 After July 31, 2020, you will no longer be able to fetch files from your PC. However, you can sync files and folders to OneDrive and then access those files from your web browser or your phone. To automatically sync the Desktop, Documents, and Pictures folders on your PC, you can turn on OneDrive PC folder backup.

Microsoft does not reveal why the feature is being removed; a possible explanation is that it is not popular. OneDrive users have to seek it out actively to enable it in the client’s settings, and it is necessary that the PC is online when the feature is used.

Microsoft suggests that users sync all important files to the OneDrive cloud to access the files directly from the cloud using a web browser on a desktop system or a mobile device.

The problem with the suggestion is that users had that option all the time. It may not have been practicable for some, e.g. when the data on devices would exceed the available OneDrive storage limit, or when data that should not be stored in the cloud all the time needed to be accessed.

OneDrive users who use the feature won’t be able to do so anymore after July 31, 2020.