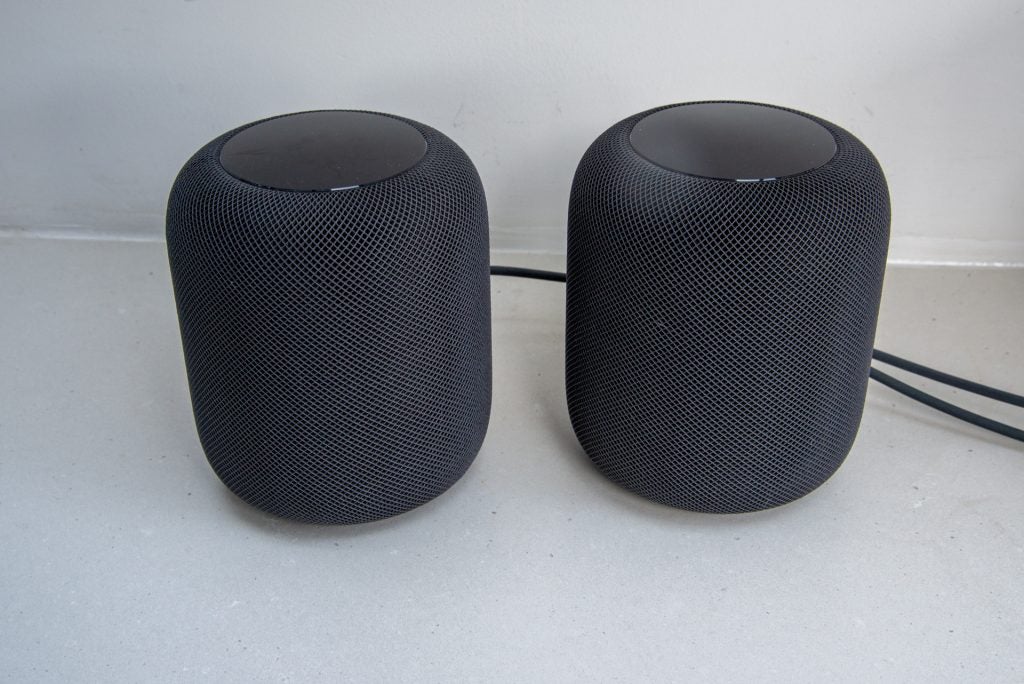 Apple announced the HomePod mini during its October iPhone event, but what about a sequel to the full-sized model? Here’s the latest news, rumours and speculation about a HomePod 2.

Apple has finished unveiling details about the HomePod mini and so our attention has turned to what we could expect from a sequel to the full-sized smart speaker. Here’s everything you need to know about the HomePod 2.

When will the HomePod 2 be released?

The original HomePod launched in early 2018. Apple announced the HomePod mini in 2020, so there’s likely no need for another smart speaker to turn up any time soon.

If Apple were to launch a sequel to the original HomePod, we’d imagine it’d turn up in 2022. Four years is a long enough gap and would give some space between it and the recent mini model.

How much could the HomePod 2 cost?

The HomePod mini was set at a refreshingly affordable price by Apple, but we can’t imagine the same policy will apply to a full-sized HomePod.

The original cost around £329 and received a price drop to £279 in 2019. We’d imagine that’s around the figure the HomePod 2 would cost, if not slightly less than that. The HomePod was largely criticised for being too expensive and we can’t see Apple making the same mistake twice.

Considering the mini is effectively a smaller version of the original HomePod, retaining the same aesthetic and acoustic design language, we can’t see Apple not wanting to be consistent whenever it adds another HomePod to its family of speakers.

There are few qualms about the look of the original HomePod, wrapped in its seamless mesh fabric with a backlit touch surface on top where Siri and volume/playback controls appear, it’s a fantastic looking smart speaker.

It is rather heavy though at 2.5kg, an area Apple could probably shave off a few grams (or a kilo). We’d also like it if Apple changed the capacitive power cable as if it breaks you’d need to send the entire speaker back to be fixed.

What features could the HomePod 2 have?

The original HomePod feature the A8 processor and this will definitely be upgraded whenever its successor it arrives. It’ll also have the U1 chip to enable the Ultra Wide Band (UWB) feature.

Apple is going big on UWB as it’ll allows iOS products to communicate to each other, transferring data from one product to another and offering more accurate location tracking. With the HomePod mini, when it comes in close proximity to an iPhone, for example, audio can be handed off quickly between the two. The HomePod 2 could act as a hub within the house much the mini will when it goes on sale, tying together all the iOS devices in the home.

Bloomberg reported that Apple is looking to add additional music services, and Amazon Music and Pandora will be integrated with the speaker. The same will likely happen for the HomePod 2 and who knows, Apple could have added even more music streaming services by the time it goes on sale.

The original HomePod, alongside Siri, can recognise up to six members of a household. The mini can also do this and we don’t doubt that the HomePod 2 will do the same. We wonder if the automatic stereo pairing functionality will work its way to the HomePod 2. We imagine it would if you wanted to have left/right channels connected to a TV, although we can’t imagine how that would work specifically, so perhaps the feature would work for music only.

There’s also Intercom, which allows users to send messages from one iOS device to another, leaving notifications on the screen of an iPad or audio messages in a pair of headphones.

Considering Apple has only just announced an HomePod mini, we can’t imagine they’ll be much news about a HomePod 2 just yet. But we don’t doubt Apple aren’t at least thinking about a fully fledged sequel. And when the mini goes on sale, we’ll have a clearer idea of what it can do compared to the original HomePod, and that will give us an even greater idea of whether another HomePod is necessary.

The post HomePod 2 – What we'd like to see from the Apple smart speaker appeared first on Trusted Reviews.

Opinion: PS5 and Xbox Series X are a waste of money without a 4K TV