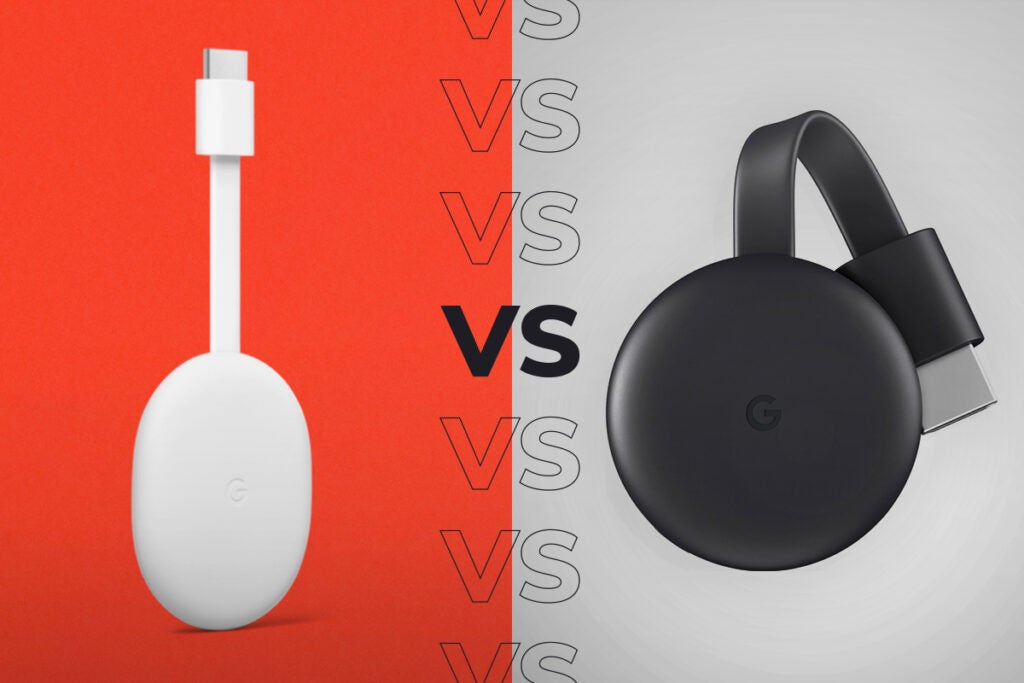 Chromecast vs Chromecast with Google TV: It’s official. Despite being more leaky than sieve and even going on sale in Walmart stores in the US, Google made its new Chromecast dongle official at its Launch Night In event.

We suppose at least one of the current players could be replaced (our guess is the Ultra), so we’ve focused this versus between the cheaper Chromecast and the latest model. If you’re after a new streaming stick, which out of the Chromecast vs Chromecast with Google TV should you get?

The OG Chromecast currently has an RRP of £30, though you can find it discounted for slightly less at £25 in various places online. That price puts it down as one of the cheapest streaming players in the market.

The Chromecast with Google TV is priced at £59.99, which puts it closer in reach to the Ultra (£69). In terms of price, the standard version is obviously cheaper, but as you’ll see, the new Chromecast can do much, much more.

While the new Chromecast keeps a similar aesthetic, there’s one obvious change from the off.

For one, it’s no longer circular! The Google TV version goes for what looks to be a slightly longer, sleeker and oval shaped profile. We have no idea why Google ventured down this design route (perhaps it got bored), but considering a Chromecast lives its life unseen and out the way, we doubt aesthetics will factor majorly in your purchasing decision.

It comes in three finishes that Google has dubbed as snow, sunrise and sky (let’s call them white, pink and light blue), which bests the Chromecast’s black and white colourway options. It’s also made from 49% recycled plastic for the more eco-conscious among us.

There’s also a remote, powered by batteries and taking a leaf out of Amazon’s book by including a zapper to control and scroll through the interface. That makes this new Chromecast less of a passive device that simply streams whatever supported content you ‘cast’ to it. It also means you can control volume, inputs, as well as connected devices such as a soundbar.

We much prefer the tactile feel that a remote gives, so it’s the new Chromecast for the win here.

Related: Chromecast with Google TV vs Chromecast Ultra – Should you pay more?

You can still cast from compatible Android and iOS apps in the usual manner, as well as directly from a browser laptop or tablet.

The new headline feature is in the model name: Google TV. It again appears to be Google taking another feature from Fire TV by actually including an interface that users can scroll through and find content in, rather than the ‘dumb’ media remote that the original Chromecast is/was.

With Google TV, which appears to be replacing Android TV, it offers users a gateway into content from one place, with apps such as YouTube, Netflix, Disney+, ITV Hub, Prime Video et al available. If it’s already supported on Android, you’ll find it in Google TV.

The current Chromecast can stream in 1080p at 60fps. Chromecast with Google TV takes things a step further with 4K HDR at 60fps. There’s baked in support for Dolby Vision and HDR10+. The dongle also supports HDMI pass-through of Dolby audio content, which includes Dolby Atmos.

Both Chromecasts can operate with voice control in Google Assistant, though the original did this through a connected speaker, the latest version is able to do this via the dedicated button on the remote.

Another feature is the ability to the group the Chromecast 2020 with Nest Audio speakers for a multi-room set-up. That is still done via the Home app.

Although it’s double the cost of the standard Chromecast, the Chromecast with Google TV is a big upgrade and worthy investment. You get better visual performance with the adoption of 4K HDR and Dolby Vision/HDR10+. The remote and interface add a layer of tactility, connectivity and engagement in the experience, all while being the pretty much the same size and form factor.

Adobe yanks freebie Creative Cloud offer, now universities and colleges have to put up or shut up